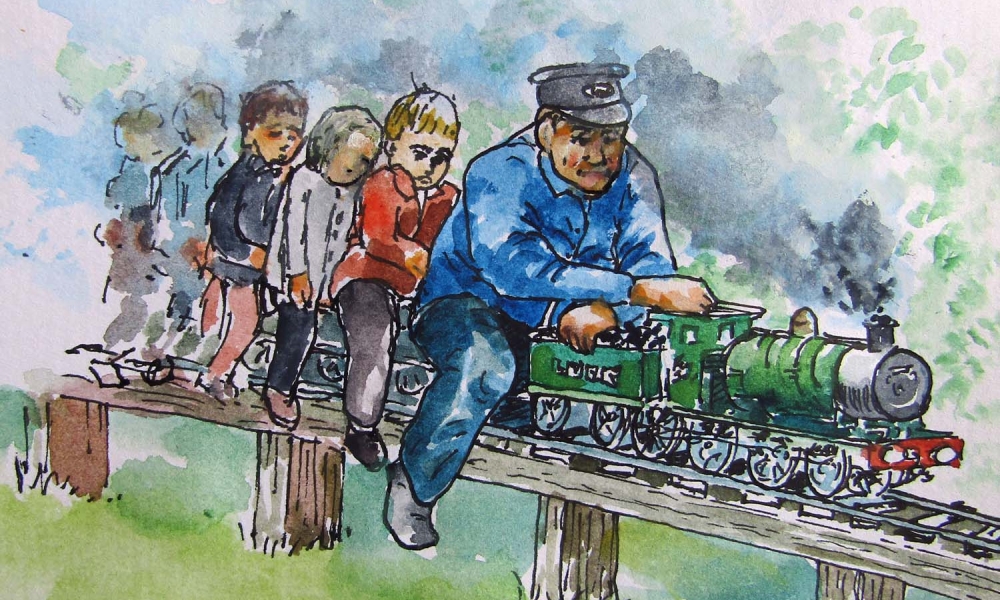 In the High Street, next door to Simon; Jane and Christine’s father, Mr. Whittock, had a fabulous garden railway. The railway ran all the way around the back of their property in a complete circuit. The tracks were mounted on railway sleepers lined up long ways, end to end. The steel railway track was on top of the wooden sleepers. In turn the circuit was mounted up off the ground with cut down sleepers mounted vertically on their ends. The whole set up looked like a chunky timber viaduct. The track was raised off the floor so the train could take passengers on its small carriages. The carriages were like long wooden benches. You would sit astride the carriage as if you were riding a horse. That is why the train had to run on a track about a metre off the ground. This gave room for dangling legs.

There were full grown steam engines still running around, near the pits and the stations around Midsomer Norton. The railways were not fenced off and adults and children could stand right next to the tracks. Simon had been fascinated by trains. This was increased when his brothers had taken him up towards Midsomer Norton Grammar School. The rail track not far below the school had rail workers shelters near it, which were great to play in, and watch the trains. The station was only a few hundred yards back along the track, so trains were going quite slowly as they passed. The boys could see every detail of the trains and waved at the passengers.

After they had finished their games, they started to wander home. Just as they were about to cross the track and go back down the hill to their home, they heard the whistle of a train as it left the station. Even from so far away and out of sight of the train; they could feel the vibration on the tracks as the train came towards them. They quickly ran across the tracks in front of the train and stood the other side to watch it pass. By this stage it was picking up speed and seemed to be going quite fast.

Suddenly a man in a suit and tie, carrying a briefcase, jumped from the train. He held his balance as he landed and shot off down the hill past the boys. In an instant he was there and then he was gone. Had he missed the station? Did he dodge his fare? Had he fallen asleep? Quite possibly he was a spy or secret agent! This conjured up so many questions and possibilities about this stranger and only increased Simon’s fascination with trains.

Mr Whittock had made his model steam train himself with his own hands. The steam train looked to Simon like the ‘Flying Scotsman’. This was a real locomotive that had beaten all speed records for a train. It could travel between Edinburgh and London in just four hours. Mr Whittock loved his train and kept it shiny and spotless. He would stoke up the boiler with little lumps of coal. When it was fired up, a loud hissing sound came from the boiler. When the door opened to top up the fuel; a burning draught of hot air would rush out. Anyone close to the cab would snatch their heads back to avoid the heat.

It didn’t matter whether the train was modelled on a famous full-size version of a famous locomotive or not; Simon still thought it was brilliant. He found it amazing that someone could make a model of anything with so much detail. How would you even start to make a steam train?

Mr Whittock was fed up with Simon asking him for a ride on his train. He explained that it took quite some time to get the steam up to make it run. He said that after a train has been run, it takes a while to clear out the ash and drain down the boiler. He couldn’t set the train up just for a one-off trip for Simon.

Fortunately, Jane had a birthday coming up! Simon was invited! It was announced that the train would be operating and giving the party guests a ride around the garden. Simon couldn’t wait.

When the day came, Simon’s Mum had a fight with his hair and attempted to get it to lie flat on his head. She failed miserably but she did manage to stop him wriggling enough to put clean party clothes on him. All the children were excited but none of them seemed as excited about the train as Simon was. The others were not bothered that they had to play party games first. What made it even worse was a game where you had to kiss a girl if you won! He didn’t think much of a game that the winner kissed a girl! The winner shouldn’t have to kiss anyone. It was disgusting.

After a number of other games they were finally called out for the ride Simon had been waiting for. They all flocked to the rail tracks and clambered on board. Mr Whittock was already mounted up behind the cab and steam was pouring out of the engine. Mr Whittock sat on a seat directly behind the cabin and fed the coal in. Simon was amazed at the cluster of brass pipes snaking around the train. There were also many valves and levers made to scale by his neighbour. A marvel of home engineering.

Off they went around the garden. The smoke and the smells wafted all around the passengers. All his senses were excited. The squeals of the children as they felt each-others excitement was the highlight of the evening. The experience was every bit as good as Simon had anticipated. They lapped the garden several times but all too soon it was over.

The first trip on this little locomotive, and the excitement that came with it, always came to mind, whenever Simon went on a train after that.