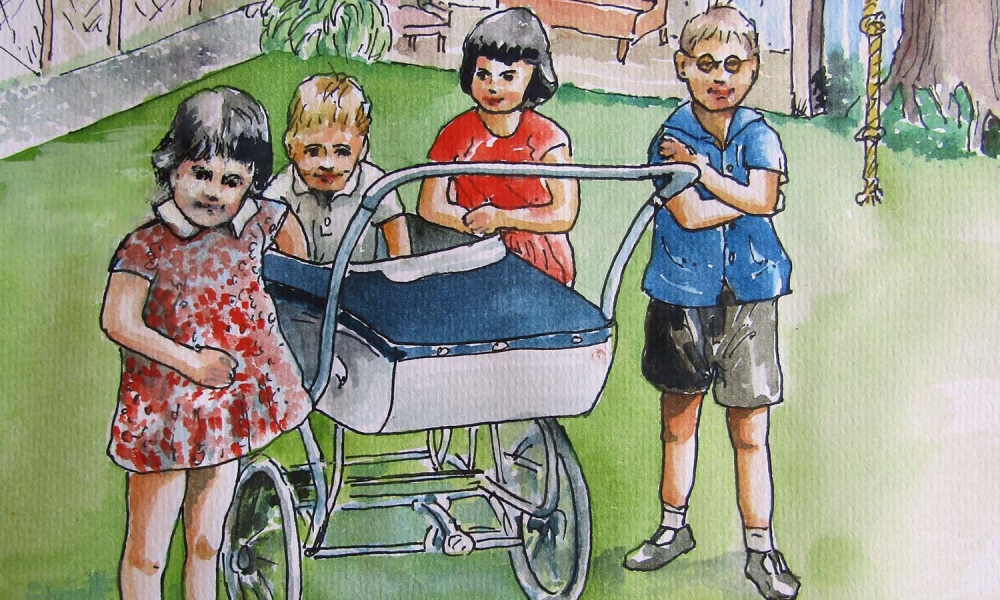 Simon did not know many girls. In fact, the only girls he knew to play with were two little girls next door. Simon only had four brothers and no sisters. A little later, his Mum would have another boy to make it five boys!

Girls may as well be aliens to Simon as he could never figure out how they worked. He based his judgement of the whole species on the two little Ladies living next to him at 59 High Street.

Jane and her little sister Christine always dressed very well, even when they were out playing. This meant that they could not climb trees, play football or mess around in the sheds in case they ‘got dirty’. They never wanted to play in the sheds because every species of UK spider lived in there anyway.

Their favourite games were Mummies and Daddies or Nurses and patients. Simon liked the nurses’ game, because they would lay him down in the summer house, cover him in a blanket and stroke his head. They would take it in turns to bring him pretend cups of tea in a plastic tea pots and feed him with wooden cake slices from their play kitchen. This game never lasted long enough for Simon, but to be fair to the girls, there was a limit to where you could go with it. If he had as much attention as this when he went in for his eye operation, he may well have appreciated it more. Sadly, this game was all too brief and ended too quickly.

The most popular game for the girls and the worst one for Simon; was Mummies and Daddies. Under the summer house, (which looked like a wooden bus shelter); there were several old chairs they could all play on. This was the house and inside the pretend house was the pram that all the boys had spend some time in as babies. It was tucked away there because there was no room elsewhere. This pram was always wheeled out for their game. It was a pram that made Simon yawn every time it appeared on the lawn. As far as Simon was concerned, the only positive was that he played the Dad, and Jon was the baby in the pram.

Jon usually liked being wheeled around the garden and visiting the imaginary shops. The shops were the shed windows, where the girls would wheel Jon up to and purchase the family supplies of groceries. They would take him down to the chicken run next to the Summer House. This was the zoo and the girls would point out the chickens as though they were some type of exotic animal. Even Jon, who was very patient with them, became very bored of his confinement in the pram. He would try and force his way out and at every attempt, Jane or Christine would ram his legs back into the pram and tell him off for being a naughty boy! These ‘girls’ games’ were not for Simon and Jon. They would much rather be shinning up the rope into the tree house or playing football on the lawn.

It all came to a head one day when Jane and Christine turned up at the boys’ back door one morning. Just outside the back door was a small patio with mainly small brown tiles broken up with deep red, blue, and cream tiles, in square patterns. There was a ‘clip clopping’ sound as the girls arrived. The tiles echoed the clatter of the shoes which heralded their arrival. They each had a pair of their Mum’s high heeled shoes on. They looked pretty and well dressed as always in their flowery frocks.

Jon was off like a shot and was away from the scene in an instant. Simon was left there looking at the girls knowing that he was in for playing Dad. But no! They wanted him to find a pair of his Mum’s shoes, so they could all make the grown-up clacking sound of high heels on the patio. Simon was very patient with girls but not with boys. He could give a boy a hard punch if they got on his nerves, but you must never hit a girl. They came armed with make-up and sat Simon on the wall to apply it. He quite enjoyed this part. They pleaded with him to dress like a girl!

Simon gave in and came out of the back door looking like an overdressed barmaid. (That was Simon’s Grampa Speed’s description of the Queen Mother!)

He had his Mums, shawl around his shoulders and was wearing his Mum’s best ‘going out’ shoes. The girls were delighted, and Simon felt like a prat. He regretted that Jon had taken evasive action and he was too polite to follow. The worst part of it was that the workmen had just started their morning lunch break and were pointing at him and laughing. They did not mean it maliciously, but they teased him relentlessly. He hated it. They called him a tart, which didn’t seem so bad. His big brother explained what a tart was. He realised it was not something nice to eat! It meant something rude which he still didn’t understand.

That was it! The heels went back in the cupboard, Simon washed his face, the pram was put back in the Summer House. Simon flatly refused to play Mummies and Daddies or any other girly game again………………… nurse and patient still had his blessing though!