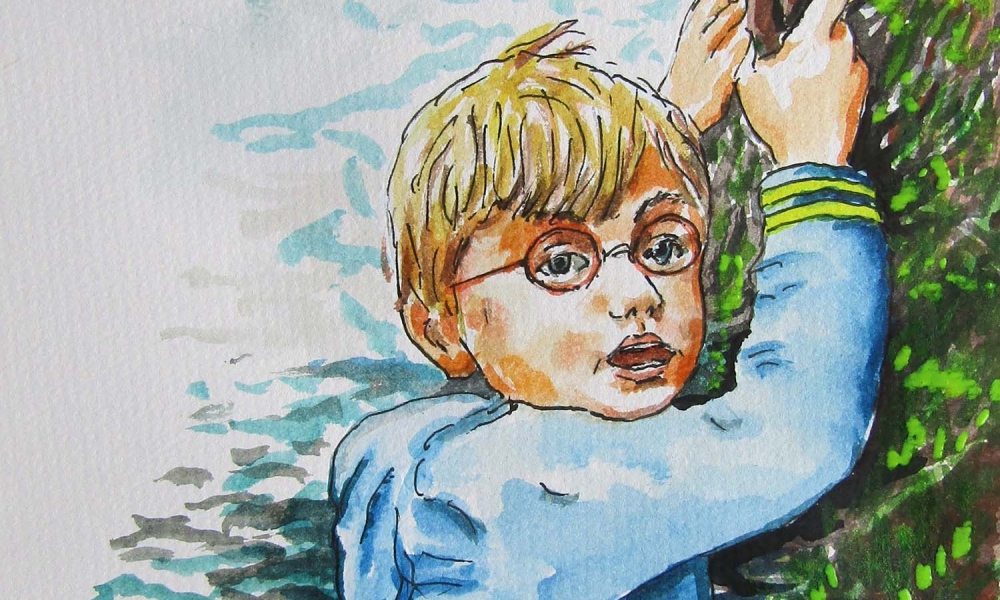 Do you ever think about your earliest memory? Can anyone remember when they were born? Maybe not; especially if to reason where you were and what you did; you need to be able to speak first? Perhaps the memory was the first time you felt real stress or excitement? A first day at school may be the most common initial memory, but what about before that? Are the very first early years of your life missing like empty pages, in the mental diary you keep in your head?

They say that as someone dies, their life spools out in a flash of memories with a lightning strike of recalled events.

Simon is grown up now, but Simon was thinking these thoughts one day and trying to pinpoint which memory came first. This memory jostled for a possible place, at the start of his life’s gallery…….

Simon was a skinny little boy of average height and fair hair that looked like a badly thatched haystack. He had pink, round NHS spectacles which he hated, and his right eye turned in towards his nose. He was teased about being ‘cross eyed.’ He always had dirty knees and scuffed shoes from kicking a football around. With two older brothers to annoy him, also comments from kids about his pink specs and wandering eye, he could have gone into a shell. It didn’t do that to him; it toughened him up.

Simon’s two older brothers; Tim who was 13 and Jer who was 11 years old, had taken him to stay with their cousin Nick. Nick lived in a Grand old house in the countryside near Bath. It overlooked a valley with Cam brook at the bottom which snaked its way through the ancient village of Radford. Simon enjoyed visiting Nick’s house as it had lots of space to play around in. Simon saw it as a grand mansion. It must have been grand, as a film star bought it after Simon’s Aunty Dot and Uncle Geoff moved away. Anthony Head was the celebrity’s name. He also has a daughter who starred in a comedy series called ‘The Inbetweeners’. Strangely enough, she was the love interest of the character also called Simon.

Cam brook was usually just a gentle stream. On this particular day, the rain had been very heavy, and the brook became a torrent. The three big boys, Tim, Jer and their cousin Nick, couldn’t wait to get out. They went down to the river when it stopped raining and took Simon. They wanted to have some fun.

Winnie the Pooh was a story book that was very popular at the time. Pooh sticks was a game where sticks were raced down a river. They sorted out sticks for everyone and gave them to Simon upstream of the bridge. The three big boys went on down the river about 100 metres, to the far side of the bridge. They took up position by looking away from Simon to see which stick came through the arch first. Simon was given the signal to drop all the sticks in at the same time. The stream was a torrent by this stage and the sticks would move quickly. The elder boys, all looked down from above, to the back of the bridge. They were in prime position to pick out the winning stick floating under the arch. More importantly, after they gave the start signal, they were looking down and away from Simon throwing the sticks in.

It all happened very quickly and was probably over in a couple of minutes. Simon remembers it very vividly; but to him it seemed to take for ever. It all went into slow motion. He dropped the sticks in to the water, but the bank was so slippery, he went straight in as well. Luckily the roots of a tree had been exposed by the flood water and he grabbed at these as he went in. He had never been in a swimming pool or learnt to swim, so he was terrified. The sound of the rushing water was so loud, that his cries of panic were swept away with the sticks. All he could see were the backs of his brothers and he was willing them to turn around. It was as if an evil force was trying to drag him under. He knew his strength was seeping away and he felt hopeless with the bigger boys unaware of his fate.

Sticks was a game from the book. The big boys explained to Simon that they would all find a stick, put it in the river and the winner of the race, would be the persons whose stick came under the bridge first.

This was when his short life reamed out before him. Hidden memories suddenly zipped through his mind like a reel of film speeded up. Everything that had gone before all flashed through his mind. Even though it was only a matter of seconds; he was still able to see each frame of film in detail. He does not remember the film but knows he saw it. Every detail was very crisp at the time but gone from his mind just as quickly.

As his grip was slackening; his mind accepted that he would be washed into the torrent and drowned. Just then, the sticks went under the bridge and the big boys looked round. They saw that Simon was holding on for dear life and the water was dragging him away. They ran as fast as they could to get him, but even then, he had to summon all the will power he had to hold on.

The next thing he remembered was being put to bed in one of the large bedrooms at his Aunt’s house. He felt the cold had completely knocked him out and the boys must have carried him back soaking wet. He was terrified and frozen. When he came to, his Aunty Dot was standing over him trying to force some foul-tasting medicine down his throat. All he wanted to do was sleep but every hour or two, she spooned a ghastly brown concoction down his throat.

All Simon wanted to do was get home to see his Mum. His Mum’s sister Dot did her best to look after him, but she didn’t have a sympathetic bone in her body. In her mind, Simon was a naughty boy and brought problems on himself. She worked as a deputy head in a local secondary school and used to scare the teenagers there, so she was quite intimidating to a four-year-old! Once he got home, it was a long time before he went back there again.