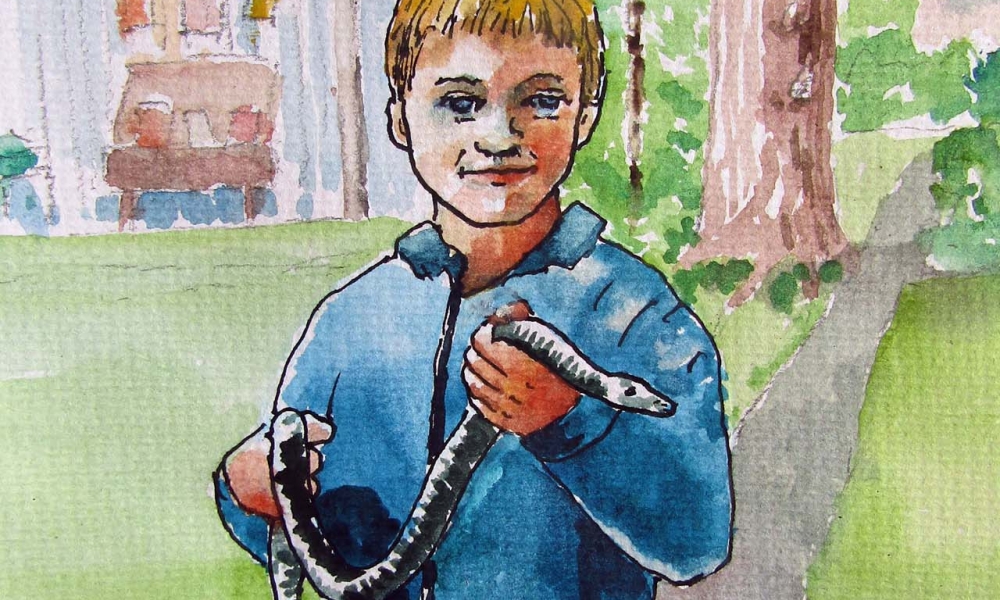 The sheds and the gardens were an adventure playground for Simon and his brothers. It was also a menagerie of wildlife. Birds, hedgehogs, foxes, and anything else that chose to live in the Somer valley appeared in that garden.

One day Simon wandered into the garden and there was his brother Jeremy waving a snake at him. It scared the life out of Simon. Simon had already been warned about adders. This snake looked just like an adder. His Father had instructed all the boys about them. The whole family would often go to Priddy Pool on the Mendip Hills for days out. There were plenty of adders there and that was why Simon knew something about them.

Priddy Pool and a pond nearby had been formed out of old mine workings. The mines on the Mendips were started by the Romans. The lead pipes at the Roman Baths in Bath were made from lead mined from the Mendips.

As you approached Priddy Pool there were signs up warning of the dangers of being bitten by adders. The boys’ Father Gordon had told them to look out for these snakes. He said, if they were walking along and they took heavy footsteps the vibration on the ground would frighten the snakes away. He told them; the snakes were more frightened of people than the other way around.  It was very rare that anyone was killed by an adder, but local hospitals did keep anti-venom in stock just in case. A few people did die in later years, but the last person was in 1975 and none since then. Even so, there are still plenty of adders on the Mendips.

Jer was in the garden letting the snake slither through from hand to hand. Simon thought the snake would inevitably bite and kill his brother. Strangely enough; this did not happen. The snake looked relaxed in his brother Jer’s grasp. He called Simon over to hold it. No way was Simon getting any closer. He was not going to get any nearer to let alone hold this snake.

Jeremy explained that this was just a grass snake. It was not poisonous and there were lots of them in the garden.  They spent the winter in the grass cutting piles on the compost heap. He said, Grass Snakes were more green in colour and had a yellow collar on their necks but vipers or adders as we knew them had zig zag lines on their backs. Even then, Simon still found it difficult to tell them apart.

The Summer was hot, and several grass snakes were coming into the garden, but thankfully no adders. There was an adder in next door’s garden and that was soon terminated. Snakes are not keen on lots of people being around and because that Summer was good and lots of children were coming around to play; the grass snakes must have gone to quieter pastures. It appeared they had all gone.

Simon’s brother Jeremy really cared for these snakes. His other brothers were not so keen. What followed was a tragedy for Jeremy. It was Jer’s turn to do some gardening. Jeremy had to mow the lawn as one of his chores that day. Suddenly there was shouting and crying coming from the garden. We all ran out to the garden to see what the commotion was about.

Jeremy had accidentally mowed over one of his grass snakes! On the lawn there were two snakes still moving around. There was one section with just tail and the other half had the head on it. Jer was devastated. He did not know whether to pick up the pieces or run away. He was rooted to the spot. It was a memory that will remain vivid in Simon’s memory. Snakes alive! Or in this case Snake dead. By the way, Simon is still not very keen on snakes.