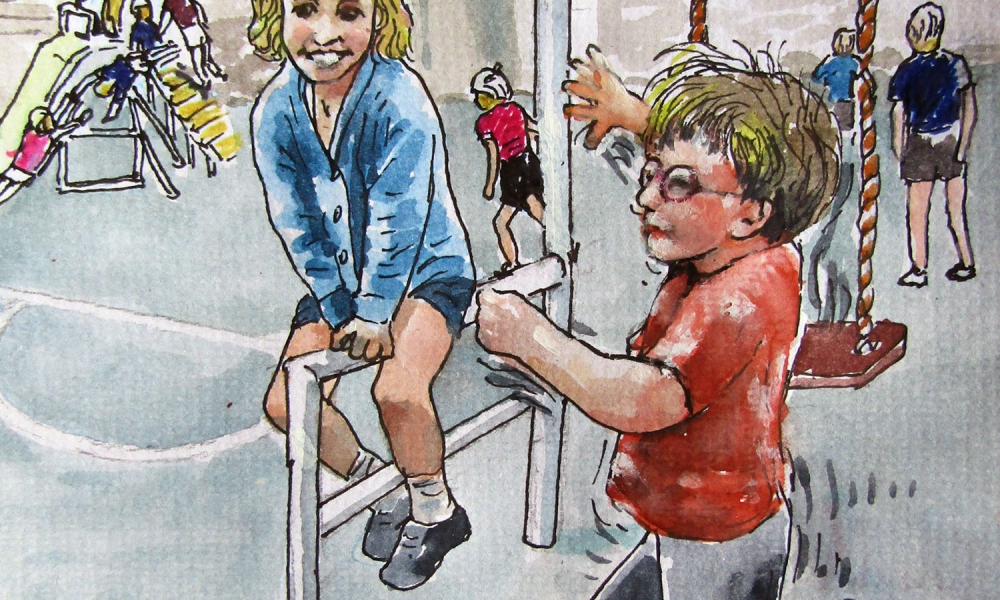 Simon’s Mum decided that he was too much of a handful to keep at home until he was five and ready for school. She sent him along to Welton Infant School when he was four. Her eldest boys, Tim and Jer spent a year at the local Grammar School but were then sent off to boarding school near Glastonbury. This meant his Mum had a break from her 2 oldest boys during term time and from Simon during day-time hours. Blackford Sexeys was the name of the school the older boys attended. It had girls boarding as well, so they were quite happy going away to school.

Simon’s Mum also had a baby at home called Jonathan to look after. His Mum helped his Grandad in a building and decorating business which at one stage had 40 men working for it, including Simon’s father; Gordon. You can tell from that, she had her work cut out, with running the accounts for the business and looking after four boys. She helped her Father in the sign workshops. She even did some part time teaching at Simon’s school! This helped her influence the school to let Simon into school early. This was never corrected, so Simon went through all his schooling one year early.

Right from the start, Simon did not like going to school. He did everything he could to stay away. His Mum had to drag him to school every morning. He found that if he could hide for long enough, his Mum had to get to work, or run some errand and he would be left in the house. He remembers that on one morning, his Mum was ironing sheets. He crept under the ironing board sheets and hid there as quiet as a mouse, until she gave up looking. He often pretended to be ill but by lunch time he was hungry and ended up being dragged to school in the afternoons.

His dislike of school started on his very first day there. At break time, the teacher told the class to go out into the playground and hop, skip and jump around the yard. Simon went out and did exactly that. He hopped, skipped and jumped all through break time. He looked at the other kids and they were stood around chatting with each-other, climbing apparatus and doing very little. He was extremely annoyed that they were not doing what they were told to do. When he asked them why they were not following the teacher’s instructions; they all laughed at him and said that the teacher only meant us all to go out and have fun. He felt very stupid and worn out.

Added to this humiliation. The toilets were all outside and they were single cubicles lined up in a row, with the door on the front, looking directly out to public view. Towards the end of lunch break, Simon was desperate for the toilet. When he went to the toilets, there was excrement over the floors of all of them and toilet paper strewn around. He just could not face going into one of them. It was disgusting. When he went back to class, he held it in for a while but had to go in his pants. The boy sitting next to him told him he smelt disgusting! Simon denied it was him. The tables were set out, so that they formed a circle of chairs around them. The first child noticed the stink, then the next one on the other side and then the whole circle. Fortunately; they could not be sure it was Simon. They all sat through afternoon class gagging, but not absolutely sure who the culprit was.

After what seemed like an age, the bell rang and Simon’s Mum came to pick him up. As they walked back to the house in the High Street, Simon said to his Mum. ‘Mum I need the toilet!’ and then straight after, ‘Oooohhhh, too late, I’ve been in my pants!’ The gap between saying he needed the toilet and going was far too short to be believed. His Mum probably guessed what had happened and like Mum’s do; sorted it all out back at home.

One of the reasons Simon was not keen on getting to school was that he liked to see the workmen carry out their trades. There were carpenters, painters, sign-writers turning up every weekday morning. A few yards from his back door, was the signwriting workshop.

Simon loved the sign-writers workshop. There was a maze of old wooden buildings at the back of the house in Midsomer Norton High Street. One of these shacks was where three sign painters worked. F. Speed and Sons was the name of the business and Fred Speed was Simon’s Great Grandfather. Fred Speed set up a business for his sons who had been fighting in the First World War. Fred’s sons; Percy and Arthur were both very talented. Percy was excellent at carving, so he did a lot of work in churches and anywhere decorative woodwork was required. Arthur who was Simon’s Grandfather was a brilliant sign writer and was in demand from the breweries to paint their pubs pictorial signs. His Mum was very artistic and often helped his Grampy paint signs. Simon remembers a beautiful painting of a deer that Grampy and his Mum painted. It was a pub sign for the White Hart Inn, which was in the town square near the town hall. One day, many years later, Simon re-painted the very same sign.

Simon would spend hours in the workshop just watching the sign-writers at work. Whenever he thinks about those times; the smell of turpentine and enamel paints are etched into his senses with a warm glow. The way a sign writer could slide a brush down the length of a sign, in a single stroke and leave a line of perfect width and straightness, was like a magic trick. He would watch them and the other trades all day long, if he was allowed. It was certainly better than going to school.