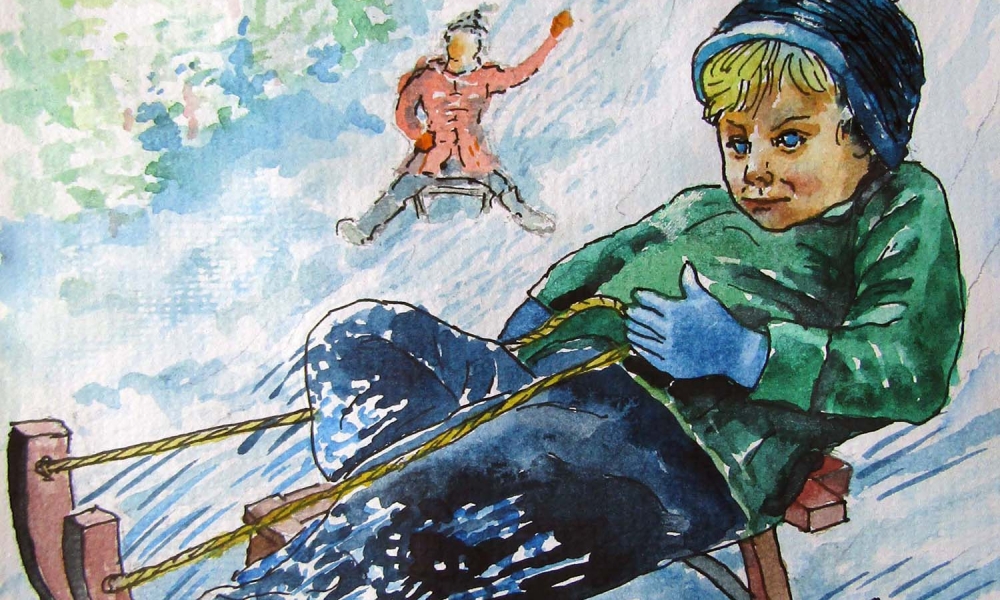 The Winter of 1963 continued with a vengeance. There were 3 months of heavy snow falls all over the UK. 3 months that wiped out all outdoor sports. Simon was desperate to get out and sledge with his brothers every day. It looked like they were having great fun.

Eventually, Simon’s Mum gave in. Simon could see his brothers disappearing out into the snow-covered landscape. Every time they left; he pestered his Mum to let him go as well. One morning she said okay you can go, but you must wrap up well and do everything your brothers tell you to do.

When he went outside, there was a watery sunshine that gave a hint of warmth. It was a false hope. As he walked out onto the High Street he could feel the cold creeping through his Wellington boots and through his thick socks and into his feet.

They walked up the High Street where the snow had been stacked so high on the pavements, that it blocked out the view of the houses behind it. They stuck to the road as close to the pavements as possible.

They turned right at the top of the High Street and walked along Radstock Road which took Simon past his school. He was very pleased to see that even if they wanted to go to school, the playground and the path into it had a mountain of snow drifted across the frontage.

The route took them down to where old mine workings were. It was not the mines that they were heading for, but the steep hills around the pits. Midsomer Norton and Radstock was a mining area for coal and there were lots of steep hills. Steep hills seem to go hand in hand with mining for minerals, so it was ideal for sledges on snow.

On their way, they collected Jeremy’s best friend called Ron Lloyd. Ron was twelve and seemed very grown up to Simon. Ron came from Liverpool and had a strange accent which Simon was fascinated by. The Beatles pop group came from Liverpool. Ron was tall and good looking and had a mop of black hair and big brown eyes, just like one of The Beatles. Not only that, Ron was very good at football and Liverpool had a great football team. Simon though Ron was wonderful. Better still, he had his own sledge.

As they carried on down to the slopes, which were on the banks of the river Somer, the drifts were getting higher. Off road there was no need to clear the snow and so Simon was sinking deeper and deeper into it. His little legs disappeared until he was waist height into snow. Simon’s brothers were doing their best to help him through, but in the end, carried him to the top of the hillside slope where they had sledged each day. By this stage the snow had started falling again and the sun had completely disappeared.

The other boys carried on with their fun and left Simon standing and shaking at the top of the hill. After all, if he had not carried on pestering their Mother to let him go, he wouldn’t be in this state. It wasn’t until Simon’s skin started to turn blue that they took any notice. They could see that he was seriously close to passing out and did what they thought was best. They blew their warm breath into his gloves and patted him hard all over. They realised, they needed to get him home quickly, so they took turns piggy backing him back to home. This was hard work for the boys, and they knew that they had to get Simon warm quickly. They needed to get help. Simon was very pleased that they decided to take him back to Ron’s house. It was much closer to where they were, and they knew they had to act promptly.

Ron’s Mum took all Simon’s freezing clothes off him and wrapped him up in blankets. She sat him in the front room, in front of the fire to thaw him out. Once Simon had stopped shivering, the pain in his hands and feet was excruciating. The blood was starting to flow again, and he did not realise that severe pain came with the recovery.

Once he started to feel better, he took in the fact that he had never been into Ron’s house before, and it did not let him down. There was a train set in the front room. It was all laid out beautifully with a track surrounded by houses. A little station with people waiting for the next train. A field surrounded by trees and cows grazing. A little-boys dream.

They all waited at Ron’s, as Simon’s clothes dried out by the fire. The afternoon wore on and they all sat watching the television until they were ready to go. If Simon could have been anywhere that day to recover himself, it would have been Ron’s house. It was a terrible experience but there was a cherry on top! He got to see inside where his hero lived. He saw a fantastic train set. He was made a big fuss of. The bad situation could not have a better ending. Did Simon want to go through it all again if he had that reward? Strangely enough, he did not ask his Mum to go out with his brothers and Ron that Winter!

It turned out to be fun, but he never wanted to repeat that experience again!

The Lone Ranger
Scroll to top