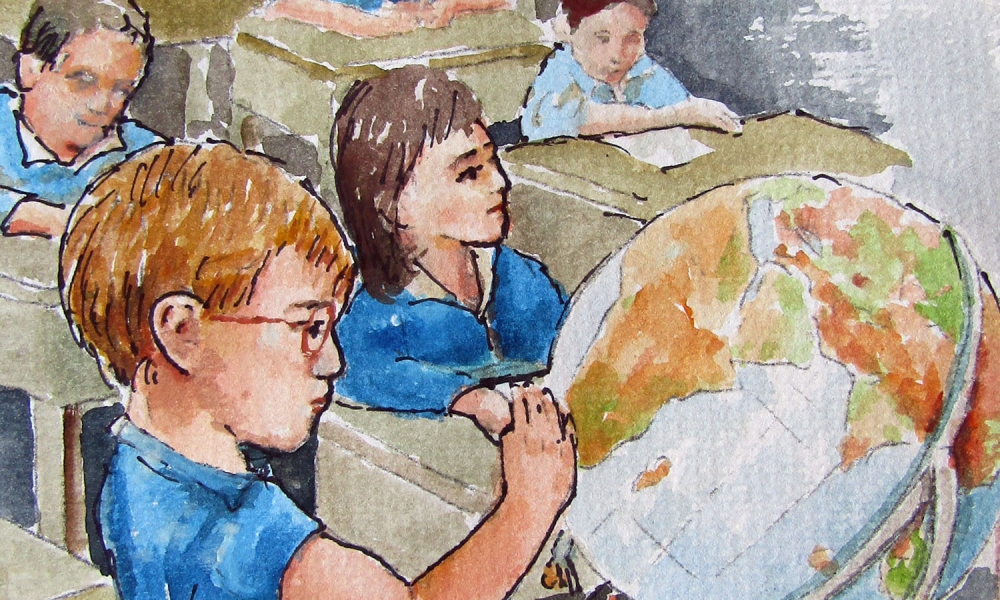 Infant School seemed to get worse the further up the classes Simon went. The top class was taught by the Head Mistress. She was a very severe lady with her hair tied to her head in a tight bun. Her command of the classroom was just as tight as her bun was fastened. One word from her and the class would fall silent.

This was at the height of Simon missing school. He was a little older and a little craftier on how to avoid school. It also helped that he was allowed to walk to school on his own. His Mum had so much work to do with looking after a large family and working full time that it was easy for him to wander off to school in the morning and divert to the workshops or the recreation ground later. The lessons from this very austere Head-Teacher were usually dull. Most of the time it involved her standing at the blackboard and droning at the class or reading aloud from some textbook.

In one corner of that classroom was a large globe of the World. It stood there for months and she made no mention of it being there. Simon wanted to spin it and see the countries of the World pass in front of his eyes. He knew that if he did that, he would get a sharp tap across his knuckles with a wooden ruler. It wasn’t unusual for teachers to punish children with a ruler across their palms. Some teachers even threw blackboard rubbers across the room at inattentive pupils. One boy was hit full on the forehead with one and the teacher didn’t even check if he was Okay! Having the cane was the ultimate punishment.

Simon didn’t touch the Globe. He had one at home, but it would always fall off its stand. It was made of two metal halves which would come apart at the slightest touch. His brothers would pick up the two halves and pretend it was a bra. They would parade across the room with Australia cupped in one hand and Iceland in the other. He was always interested in far-off lands. So much so, that when the Head Teacher said she was going to tell them, why the people in Australia did not fall off the World, it sparked his imagination. He would definitely be at school the next day for that lesson. She said that it was gravity that stopped Australians floating out into outer space. He thought that it would be fun to turn off gravity and let the Australians float around for a while.

He couldn’t wait to get back to school the next day to have the secret of gravity told to the class. The following day, it was the same old lessons, no gravity. Same the next day and the next. It came to the Friday, so Simon politely asked the teacher if she would explain about gravity and why Australians were walking around upside down. She had obviously forgotten her promise and quickly realised what Simon was on about. ‘Oh, I’ll do it later’. She snapped at him.

Directly after the Lunch Break, all the children filed in. They noticed a commotion going on at the front desk. A little girl called Janet was crying and the Head had the girl’s arm in a firm grip. Janet was a tall girl for her age and had long flowing blond hair. She was popular in the class, so none of the children liked to see her so upset. Janet was screaming and tugging at the sleeve of her cardigan to try and get it out of the teacher’s grip. Suddenly Janet took a big swing at the Head-teacher and caught her with a resounding slap across the face. With that she escaped from the iron grip and shot out of the classroom. Teacher was so stunned, she sat there for a moment to take in what had happened. Suddenly she also shot out of the classroom. It seemed like an age that followed. All the pupils were aghast at what had just happened. They were all pleased Janet had got away and even more pleased that she had given out such a fantastic slap.

Some of the girls that knew Janet well told the rest of the class why she was so upset. Her Mum had just had a baby and she was desperate to see her little baby sister, who had just arrived in the World. The Head came back into the room after what seemed an age and they realised that Janet must have completed her escape. They all hoped that she had arrived home to see her new sister.

Simon never did have a lesson about gravity, but in a way it was worth it. 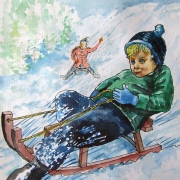